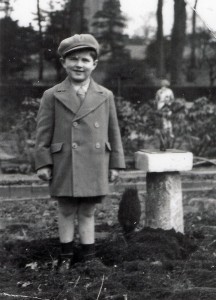 Jeffrey lived in London with his parents and two older brothers. Jeffrey was only 3 years old when the Second World War began. His parents decided to evacuate their children out of London due to the threat of bombing. This was to prove a good decision because Jeffrey’s home, and the street in which he lived, were badly bombed during the war. Each child was sent to a different part of the country – Devon, Yorkshire and Staffordshire.

Although many young children of Jeffrey’s age were evacuated with their mothers, he was actually sent to the countryside by himself. His story of evacuation began just before Christmas in 1939 when his mother took him to a Nursery School and left him in their care. Jeffrey remembers being at the nursery for several days and felt very unhappy and confused. Why had his mother left him here?

A few days into his stay, one of the nurses told him he was going on a train ride and that “someone very nice” was waiting to meet him. Jeffrey was then taken to London Euston Station and put on a train to Stoke-on-Trent. He remembers other Nursery children being on the train and that two women from the Women’s Voluntary Service (WVS) looked after them during the long journey.

Jeffrey was met at Stoke Railway Station by a Mr and Mrs Goodwin. They were to be his billet or foster family. They lived in Keele and Mr Goodwin worked as the Agent for the Keele Hall estate. To help him feel at home they bought Jeffrey two toy dogs to cuddle. 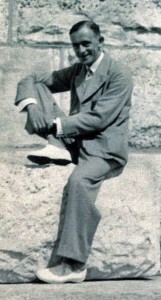 Jeffrey remembers Keele and his new home being very quiet compared to London. He spent a lot of time playing in the garden and felt very well fed on food from local farms. He called his foster parents Uncle Johnny and Aunty Mollie and felt they were very kind and good hearted people.

Jeffrey started school for the first time in Staffordshire. He was teased at school for being an evacuee, but soon settled at school and enjoyed life in Keele.

His parents came to visit him during the war. His mother and brother came first and then his father and eldest brother. Aunty Mollie also wrote letters to Jeffrey’s mother telling her about Jeffrey’s life and how he was doing.

Towards the end of the war, his father came to take Jeffrey home. The family now had a new life in St Albans and wanted their family back together again. By this time, however, Jeffrey had lived with his billet family for longer than his birth family. He was no longer sure where he wanted to live or with which family – his birth family or the billet parents he had grown to know and love.

Jeffrey did return to his real family in St Albans and even started a new school. His parents and brothers were very pleased to have him home, but Jeffrey missed Mr and Mrs Goodwin and his life in Staffordshire.

Jeffrey’s mother could see that her son was not happy in St Albans. In secret she telephoned Mr and Mrs Goodwin to ask if he could return to live with them. Jeffrey’s father did not want him to leave and refused to give permission for Jeffrey to be adopted by the Goodwin’s. Eventually, Jeffrey’s mother forged his father signature on the adoption papers and, aged 9, Jeffrey was adopted by his billet family and returned to Keele.

Evacuation for Jeffrey was a positive experience. He loved his new life in Staffordshire and his new parents. He also loved his birth family.

Jeffrey says it was like winning the lottery when he was evacuated. In the end he gained two families.