Rob Weston was born near Alton in Staffordshire. He recalls growing up in the area and receiving several lots of evacuees in the early wartime period who attended his school and stayed with families that he knew.

He remembers playing and singing with the evacuees and told us that they were all absorbed nicely into the community; there was very little disturbance to local life. A teacher that came with the evacuees taught at his school and his favourite ‘favourite’ evacuee was a little girl called Maureen Hopkinson, who he would have “gone through fire and water for!

Rob can remember his own mother going to the “Iron Room” at his school to choose some evacuees and coming back with Pat and Patricia, who were from Manchester:

However, like most of the evacuees in Alton, they didn’t stay long, and were soon fetched home and by 1942 there weren’t many left. 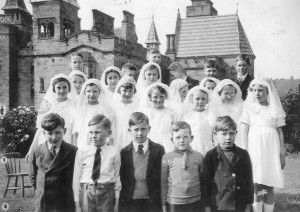 Pupils of both the local St. John’s and Manchester’s St. Robert’s Schools.

When reflecting back on the evacuation scheme he refers to it as “a bit of a non-event really” as they were all integrated so well and the war didn’t affect his area too badly. This is aside from hearing the German bombers flying over occasionally and dropping a couple of bombs a few miles away.