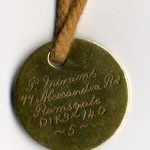 The tag that Peter was wearing when he was evacuated to Uttoxeter.

Peter Leonard Mirams was born in Ramsgate in 1933. He was the youngest of three children, and can remember playing on the sands until 9 o’clock at night with his sisters. His father was a lorry driver for a building firm and the family lived on Alexander Road in a large six-roomed house next to a pub. He remembers using a table in the pub’s cellar as an air raid shelter.

He doesn’t recall being told about evacuation by his parents or sisters, and can’t remember saying goodbye to his father on the day. He was taken to school on 2nd June 1940 with a change of clothes, gas mask and dog tag with his name and address on. They were put onto a carriage with no toilets and very little room, before stopping at Rochester for a drink of milk and some fruit. They were then taken on through the Midlands until arriving at Uttoxeter quite late in the evening, where they were stood in a Catholic School and “lined up like sheep” waiting to be chosen. His eldest sister stayed with him, and their other sister was chosen separately.

Peter and his sister were taken to a lady’s house where they were told to wash in the shed at the back of her house. Here they ate a sandwich and were put straight to bed before going to school the next morning. Click on the link below to hear him speaking about this traumatic first night:

Peter does not have happy memories of his billet in Uttoxeter. Mrs Jones, whose husband was not there, had a beautiful garden which they were not allowed in, and the two children were expected to come straight home from school before eating and getting ready for bed in the garage. They didn’t know where their sister had been billeted until six weeks later when they caught sight of her. She was living with the Station Master and his family.

About nine months later, Peter’s mother came up to Uttoxeter, shortly followed by his father after their house was bombed. He managed to get a job in Uttoxeter and before long the family were reunited. Unfortunately, as their home in Ramsgate had been bombed, the family couldn’t return with their friends once it was safe to do so, and they stayed in what Peter recalls was a hostile environment. To this day, he is desperate to find out more about his Ramsgate heritage.