Jim Homer was born in 1931 and lived in Ladywood Road in Birmingham over his father’s pub, The Fiveways. He lived with his mother, father and sister Olga (Harvey). When the war started, their house received a direct hit and he can remember being buried in the cellar for a few days. He attended a school just down the road and enjoyed school until the children were told they were going to be evacuated. He can’t remember much about any conversations about evacuation, but does remember wearing his gas mask while waiting to catch a coach in Birmingham. Nor can he remember the journey to Staffordshire as he was far too busy eating his sandwiches.

He was taken to Shooting Butts, a boarding camp for boys in Staffordshire, along with a few of his good friends like Ray Mew and really enjoyed his time there. He can remember there being six dormitories in total, with four given over for sleeping with bunk beds and one for woodwork and metalwork.

Listen to him talking about his daily routine at Shooting Butts by clicking on the link below: 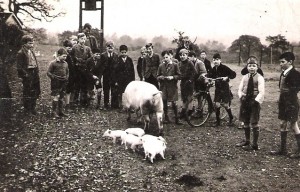 Jim and his fellow boarders at Shooting Butts.

They kept pigs at the camp, and spent a lot of time outside both as part of their school lessons and at designated play time in the afternoons. They would go to Rugeley to go to the cinema, and spent a lot of time on Cannock Chase. He remembers taking part in the Hare and Hounds run, and some of his friends catching themselves on a gauze bush while they acted as hares.

He doesn’t remember anybody visiting him at camp, and always wanted to spend his holidays at the camp, rather than go home. While he was there he kept in touch with his parents by writing letters, and he would receive half a crown pocket money from his father each week. He thought he was rich!

He was sad when, at the age of 13, he left to join his mother in a new flat in Birmingham. He really enjoyed his time at Shooting Butts and thinks that more than anything, it gave a lot of children from the poorer areas of Birmingham an idea of what they could be and how they could have a better life than they were used to in the future.