Barbara was born in Birmingham and lived in the centre of an area heavy with factories before being evacuated to Gloucester with her sister at the start of the Second World War. At Christmas 1939 they came home because she believes the lady they were staying with didn’t really want them and they weren’t happy there. Barbara then returned to her old school in Birmingham until June of 1940 when her school was evacuated to Pipewood Boarding Camp for Girls. 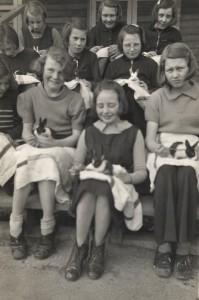 Barbara and her Pipewood classmates with the rabbits they kept.

She stayed at Pipewood until she was fourteen and then she returned home to work and so help her parents financially. She remembers her time at Pipewood as very happy, and as a place where she spent a lot of time outside and being with her school friends. She remembers having regular visits from her parents and her sister also visited from time to time.

To listen to her talking about her arrival and morning routine at Pipewood, click on the link below. A transcipt follows:

She is still in contact with the ‘girls’ that she went to Pipewood with.