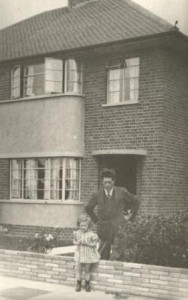 Hazel Robinson with her father outside their home before she was evacuated to live with her grandparents in Alton.

Over 70 years ago, the people of Staffordshire played their part in the biggest domestic mass movement of the population in the history of the United Kingdom. The early months of WWII saw over 3 million people evacuated from vulnerable towns and cities to parts of the country which were considered ‘safe’. Many of those evacuated were children, and a number of them came to the towns and rural villages of Staffordshire from cities such as London, Birmingham, Manchester and Liverpool. Before we began our research, we knew very little about how this momentous event affected people personally and how it impacted upon Staffordshire’s communities.

Since the summer of 2010 we have been recording the oral histories of those involved in the evacuation of children to Staffordshire and collecting as much memorabilia and photographic evidence as we can to add to the project archive.

We have heard about the traumatic experiences of children like John Doughty and Tony Longdon who were sent away without much explanation of what was going to happen to them. 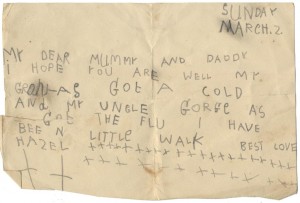 We have also listened to the heart-warming tales of those like Ernest Chadwick and Margaret Hancock who were accepted absolutely into their new communities and never wanted to leave. As well as recording the evacuees’ stories, we have made every effort to track down the memories of those who were part of the local communities to which the evacuees came. We have heard the wonderful memories of people like Beryl Alderson who enjoyed having a new playmate, and also the ordeals of children like Dorothy Chadwick and Frances Cooke who didn’t particularly like sharing what little they had with one more! 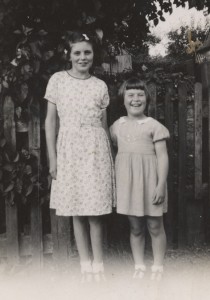 Thanks to funding from the Heritage Lottery Fund, we have now recorded the stories of over 90 people who were involved in the mass movement of children to Staffordshire during WWII. Unfortunately, we were unable to interview everybody who has a story to tell, but we have collected written testimonies from as many as possible to add to the project’s archive.

As a lasting legacy, the oral history recordings and transcripts of the interviews will be preserved for public access in the collections of the County Museum Service and Archive Service respectively. There will also be a touring exhibition from September 2012 which will promote the work that has been achieved over the last two years (click here for more information). We have also published a book, with copies being given to all participants, and made available at Staffordshire Schools and Libraries.The book contains extracts from the interviews as well as context for events taking place.

For more information about the book, archive or touring exhibition, or to leave your own memory of WWII evacuation in Staffordshire, click here or e-mail cotm.projectofficer@staffordshire.gov.uk.