Gladys Jones (fondly known as Irene) was brought up in the centre of Birmingham. Unusually for the time, her parents had separated, and so she lived with her mother and siblings in various homes before being evacuated to Coalville, Leicestershire at the start of WWII. She was never actually registered for this first evacuation, and so was ‘left over’ when they got to Coalville and an extra place had to be found for her. Her second evacuation to Pipewood camp in Staffordshire was a lot smoother and she recalls this, the “best day” of her life in the audio clip below: 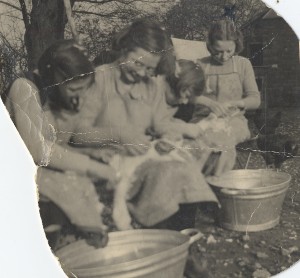 Irene was one of the girls who helped to pluck the ducks for a meal in honour of a visit by the Lord Mayor of Birmingham.

She has many vivid memories of Pipewood and still has a great fondness for the Pipewood teaching staff and several of the fellow boarders who she has stayed friends with all of her life. They were very well cared for at the school and were always well fed. They were well educated and they also enjoyed performing concerts for various guests who were observing the success of the school as a sort of experiment.

She believes that the evacuation scheme was very successful and her time at Pipewood did shape her whole life, despite her early return to Birmingham which was a “culture shock” after the countryside. She now lives in Gloucester as she met her husband there when visiting an old friend from Pipewood.