Herbert Henry Bugden was born in Ramsgate, Kent in 1928. He was delivered at home, in his house opposite St. George’s School, before moving with his mother and father to the lodge at Pegwell, where his father was Head Gardener at the estate. The owner of the estate used to give Bert a shilling every time he saw him, and he used to tell his father: “Your sons going to break me”. Bert attended Christ church School in Pegwell before moving toSt. George’s grammar school in 1939.

Bert remembers when the Dunkirk evacuation began, which was very close to where he was living, and soon after it was decided that they would evacuate the school. At this time his father had been in hospital due to a bad leg and appendicitis and you can hear him talking about the morning he left home by clicking on the link below. Alternatively click on the link below that one to open a .pdf transcript.

He didn’t know where he was going, but can remember seeing trains for the Dunkirk evacuation pulling in and out of the station. He sat by his mate Jack Beech on the train, and they managed to get billeted together when somebody asked for two boys.

They were taken to Stafford, and then on to Doxey to a very nice semi-detached house owned by the Singletons. He remembers eating some excellent home-grown tomatoes upon their arrival. The couple were very kind to the boys, but they were moved on just before the Christmas of 1940 because Mrs Singleton was expecting a child. From here they moved up the road to Mr. and Mrs Cooper. Mr. Cooper was a cowman, and on Saturdays Bert would join him on the walk across several fields to help him at the farm. During Bert’s time at the Cooper’s, Jack was sent for by his mother, and so Bert stayed with the Coopers in their three-storey house and made friends with the locals. Again, he was happy here, but was moved on again because Mrs Cooper was expecting a child in the winter of 1942.

While Bert was with the Coopers, his father lost his job because the army had moved on to the estate. He was not fit for military service, and so his parents went to live in Black Heath, where his mother had lots of family. They both got jobs in Oldbury, and Bert would go and visit occasionally at weekends on the bus (his parents moved back to Ramsgate in the 1950s). 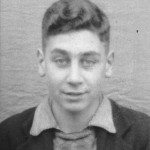 From the Coopers he moved in with Billy and Marjorie Maiden in Sandon Road on the other side of Stafford. Billy was a garage worker who kept rabbits, and Marjorie was a lovely lady who insisted on being called ‘aunty’. They had a dog called Elysium who was, in Bert’s words “…just about tolerable…”, and he was only asked to clean out Billy’s rabbits once after putting bran down instead of sawdust, which the rabbits completely scoffed! Bert recalls that this was an exciting sort of open house, with people coming and going all the time. To hear him talk about this click on the link below:

He stayed in Stafford until Christmas 1943 when he left school and joined the Royal Navy. He doesn’t recall any problems whilst he was evacuated, aside from getting used to strange Staffordshire words like ‘nesh’ and ‘mardy’.