Peter Cotton lived on a housing estate in Chesterton (near Newcastle-under-Lyme). He had a big family and a four bedroom house. His father worked down the local pit, and his mother was the neighbourhood ‘jack of all trades’, who would lay people out and be called when the midwife couldn’t make it to births in the nearby houses. 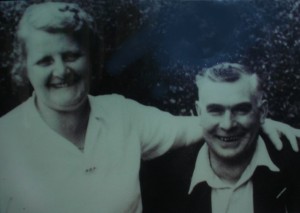 He remembers the community as a very friendly one, with lots of children and a lot of sharing between neighbours. He remembers the delivery men coming on horse and cart and the horses stopping at every house to have a crust of bread from the children.

Peter wasn’t really sure what an ‘evacuee’ even was, so to hear Peter talking about the first time he saw one, click on the link below to open a fascinating audio clip from his interview.

Peter speaks about guilting his mother into taking an evacuee home…

After taking his evacuee home, Ken Powell (the evacuee) and Peter became thick as thieves. Ken became the newest member of their ‘gang’, much to the dismay of Peter’s younger brother, who was cast cruelly aside! He remembers Ken’s arrival as though he were a player being brought off the sub’s bench to join a football team; everybody accepted him. He remembers going potato picking with Ken and both of them getting paid with a bag of potatoes and a turnip. He also remembers Ken cutting his chin when trying to jump between the sheds of the next door neighbours.

After a while, Ken’s dad Alf came to join them as a Bevin Boy, and Peter’s dad took him under his wing as he didn’t fit in quite as well as his son had.