He started school at Sandringham Road and was evacuated from there to Sea Palling, Norfolk where he lived in a boarding school with his classmates.

After a few months invasion was feared and they were moved to Onecote. In the following clip he describes arriving in that hall and how he was finally chosen:

A Mr. Smith stepped up, and took him with him in his car taking the children to their billets. Peter ended up going back to his farm with him. 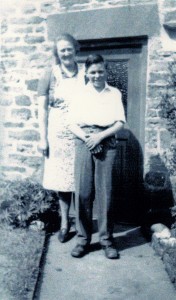 At this farm he soon settled in with Mr. and Mrs Smith and Betty their daughter and nephew who was in his thirties. He called them aunty and uncle. He shared schooling with the local children, and can’t remember any bad feeling towards the evacuees. His sister Eileen was billeted on a neighbouring farm while he was there but he didn’t see much of her as his billet went to chapel and Eileen’s were a church family. There was a real divide between these sets in the village.

While he was away his father was very ill with a brain tumour but had agreed a job for Peter upon his return, which he didn’t want. His mother thought she would be able to cope with one child by herself after their father had finally died, so she had Eileen back, and Peter stayed on until he was 15 at which point he started this job in London. He hated going back and was teased by his new colleagues. He loved the farm and is still in touch with Betty (click  here to hear Betty’s story).