Michael Whitebrook was born and raised in a cottage between Newborough and Hoar Cross, Staffordshire. He still lives in this cottage with his wife Joyce. He remembers the arrival of the two bus loads of evacuees from Ramsgate, and how they nearly doubled the intake of the local school well passed its 100 capacity. Teachers came with the children, and they were all taught together, making tables of two, into tables for three, etc. The existing headmaster Mr Samuel Cobb liked the cane, so there was never much trouble from the new arrivals.

He wasn’t an only child but his sister was working away and his brother had been in the Army since 1942, so when the evacuees arrived there was only him and his parents in their two up – two down with an outside toilet. Listen to Michael talking about the billeting process and how they chose their evacuees by clicking on the following link:

Michael gives the impression of a home bustling with people during the war. Even when some evacuees left, others would soon fill their place, and they also took in lodgers working at the Tatenhill aerodrome, originally from Liverpool. At weekends, the lodgers’ wives and children would want to visit, so at one point Michael can remember there being 14 in the house with just a tiny front room, kitchen and two small bedrooms. 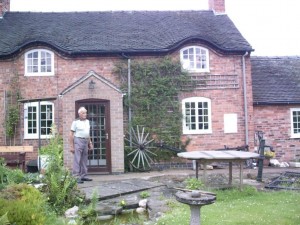 The cottage in which Michael and his family hosted the evacuees

All of the locals and evacuees got on, although he does remember letting them go into fields where they knew there would be a young horse or bull to contend with and watching them run away as fast as they could. However. he claims this was all in good fun, and they played together in fields making slides from the hayricks. There was some trouble from children who couldn’t settle, and these often went to live at Kingstanding Hall. Mainly though, he tells us that the evacuees staying with him would tell us that they had the time of their lives.