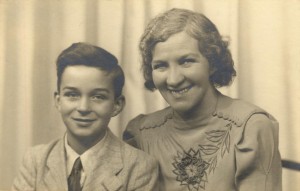 Max and his mother

Max Reynolds was born in Wolverhampton in 1931. In 1939, when his father went Missing in Action, his mother sent him to live with relatives on the Clee Hill in Shropshire to keep him safe. The area of Staffordshire near Wolverhampton where they lived was safe enough at this time, but she did not want to lose another member of her family. Max didn’t enjoy his time in Shropshire, and felt it was very old-fashioned, with regards both his schooling and home life. He had been used to a relatively modern school in Penn and found the almost Victorian ‘country’ ways hard to get used to. However, he didn’t have to persevere long, as when his father was finally reported as being a Prisoner of War, his mother was so relieved she fetched him home.

Max gives a very interesting account of his home life for the remainder of the Second World War where he and his mother took in a number of evacuees from London including a mother and her child and a number of those serving at the Cosford RAF base nearby in Shropshire. He doesn’t remember seeing much of the war, although can remember the barrage balloons over Penn Common. He also remembers a bomb dropping whilst he was at school.

He can remember his mother having some compensation for sharing her home, but it wasn’t much, and the kitchen that everybody shared was tiny. However, he enjoyed sharing his home with so many interesting people and gained a love of aeroplanes from one lodger called Sam who was an Air Force lad studying Electricity at college. Click on the link below to hear him speaking about their lodgers:

Max Reynolds – stories of his evacuees

One of his most vivid memories is of watching a returning soldier walking towards him and pass him into his house. They didn’t recognise each other but it turned out to be his dad who had finally made his way home. It was difficult for Max to get used to having a father at home again, after being the ‘man of the house’ for so long.