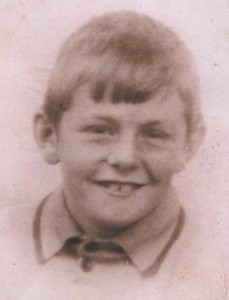 Gordon Warren was born in Ramsgate in 1930. He lived in King Street with his mother, father and two sisters. He remembers King Street as a busy thoroughfare and there were plenty of young people around for him to spend time with. He lived in a house attached to a general store, which was on three floors. Unfortunately this was bombed whilst he was away, and the back of the building was completely destroyed.

His elder sister was evacuated toTithe Barn Road in Stafford and his other sister went to his aunt’s in Middlesex. All siblings were evacuated separately. Gordon remembers being excited about being evacuated, although can’t remember much about the journey itself other than having his gas mask and some refreshments on the train. He got on a train with his classmates at Ramsgate and pulled in at Gnosall where they then went to High Offley and stood in a hall waiting to be chosen.

He first stayed with the Lees family for nine months until they left the area. While he was there he went to school in High Offley and can remember the local boys didn’t take to the evacuees straight away. Gordon had a scuffle with one of them. Three of their teachers came up from Ramsgate to help teach in the school: a Mr Lowman, Mr Cooper and Mrs Clark.

After nine months he went to live with the Partons in Shebdon. He then went to school in Eccleshall. The Partons lived in Low Cottage with two lilac trees by the front gate. They had oil lamps and no electricity, gas or water. Mrs Parton was quite strict. She had two daughters and Gordon was there for just over three years. During this time he went home to Ramsgate once, and can remember sitting in the Anderson Shelter while the bombs were dropping. He was pleased to get back toStafford.

Mr Parton was the foreman on Dukes’ Farm, and Gordon used to help with rabbiting and potato picking. Click on the link below to hear Gordon talking about his life as an evacuee in the countryside:

He has fond memories of a walking holiday in North Wales while he was at school in Eccleshall. He left Stafford when he was 14 to get a job in Ramsgate.